I am not completely sure how my weekend got planned…but it is here and it is a busy one!

I started my pre-weekend with some much needed yoga at the gym. The calm before the storm of my weekend plans 🙂

My calm before the storm 🙏 This weekend is going to be a busy one! #yoga #nameste @fitapproach #awarewithpink #bca @myaftershokz #sweatpink

Queue working all day, picking up little man post nap, driving for 2 hours, meeting up with Papa, then heading to the Kansas City Marathon Expo!

I met a lot of inspiring runners tonight!

A lot of first time half and full marathoners. A few returning runners – you don’t ever leave, just take a break for a time and come back for more!

There were a couple stand out individuals that I made sure to talk to for a little extra time. Marsha was one of these awesome ladies! She hadn’t run in a while and came back to running for this race. She was worried about some new pain she was having in her knees and was worried about the hills on the course. I talked her into running with my group Saturday morning!

While the 2:55 finishing time wasn’t a far cry from her capabilities, she was just worried about putting a time on the race and feeling disappointment if she wasn’t able to make that goal because of her knees. I assured her that finishing the race was her only goal and I would try to help her to that finish line!

After the expo, I was pooped.

Standing around on concrete for 2+ hours is not my idea of a good time the night before a race!!…but it is always a fun experience to see people at the expo and then on race morning!

I headed home and ordered some yummy Which Wich on my phone…ready for pick up when I arrived! 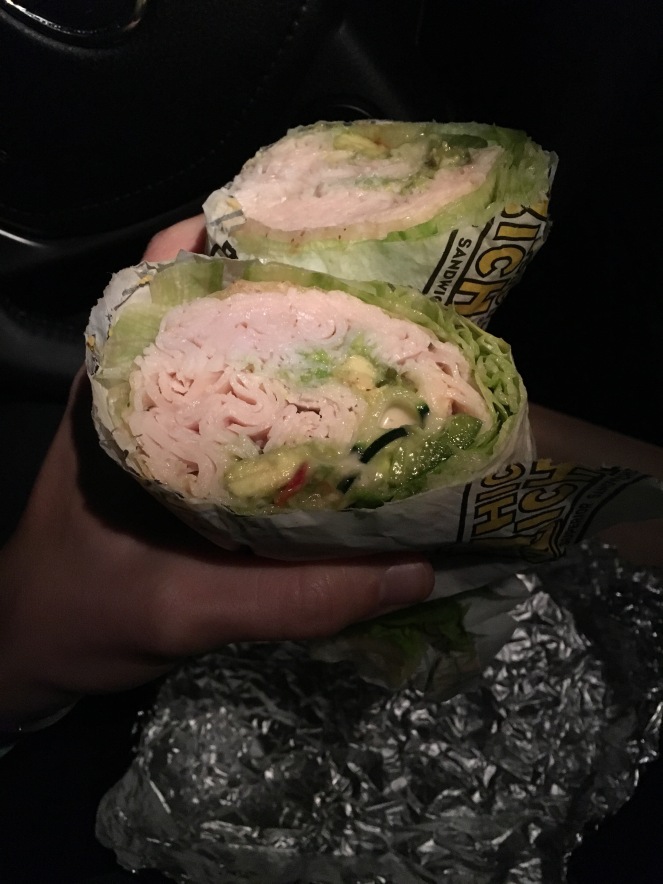 The last part of my evening was spent laying out my clothes for Saturday morning! There is nothing better than laying out EVERYTHING you need for the next days race…makes the hustle and bustle of getting ready (and quickly) a lot less stressful!

I was up and dressed in no time,…thank you pre planning #flatlindsey!! 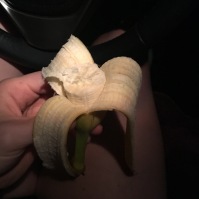 Before too long, it was time to go line up! I had a little trouble finding where to drop my bag off…but mostly because I wasn’t paying attention to where I was walking…

There were drones and fireworks…and lots of excitement!! 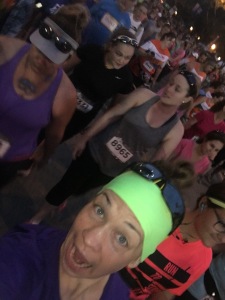 I gave anyone who wanted to listen my speech about Smart Pacing and my strategy for the day…a few gals were VERY interested in what I had to say (good thing, they finished before me!!) And we were off!!

Today was a warm 65-70 degree start, overcast/cloudy and breezy! It was supposed to get warmer, but the clouds really helped!! 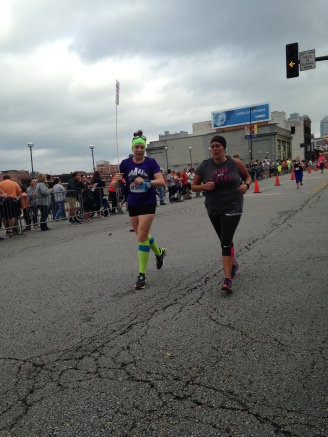 Taken by: June (a running friend that was in town for the race and I didn’t even know it!!)

Taken by: June (a running friend that was in town for the race and I didn’t even know it!!)

Once she crossed, I stopped on a dime before the finish, checked my time, saw that I still had plenty of time to wave in a couple more runners. I went NUTS yelling at the next 2 runners to finish strong!! There were 2 runners that I thought FOR SURE I could get in – as long as they were giving me all they had left! I finished behind a gal that was full tilt sprinting!

My Garmin was stopped a couple steps after I finished and when I checked, it was 2:55:00 – BOOM!!

After checking online, my results are 2:54:39…which was the time I had RIGHT BEFORE I crossed the line with the first gal... I stopped before the line, but I think that I was close enough that it read my chip anyway. Oh well!

This was a great race! I always love running the KC hills – always a challenge!

After the race, I stuck around to see some of the sights and sounds. I grabbed a beer and a wrap, was handed some Chic-fil-a fruit and chicken sandwich, grabbed some fruit and water…and milled around talking to other runners that I knew! Some had a good day…more had a crummy race experience. The humidity played a big part for some A-games not being met…but I think that it was overall a nice day for a race!

A couple running friends were running their first full marathon – and the KC hills are not forgiving! Congrats Sophia and Alayna!!

After parking ways, I headed to Grinders for a Oiselle ladies meet up 🙂 I wasn’t originally planning on going since I finished my race earlier in the morning…but since I stuck around for Sophia and Alayna to finish the full, I was right on time!

Running, beer, talking about running, coffee, more running, tots…all equals a great time 😉 I hope that I can go to more meet-ups! I know that we are all over the state (and country for that matter)…but growing my running tribe is something that I have yet to really do! Until we meet again! 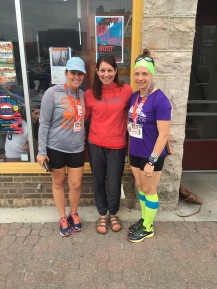 Once I got home…I just chilled out, for just a little bit. Since I stayed in KC for the meet-up, I was running on borrowed time. I still had to pack, shower, and drive a little more!!

Before long, I was on the road again – headed to Weston, MO for Miss Abby’s wedding! The barn and barn were beautiful – and of course the couple 😉 Minus the kiddos playing and yelling behind us, we could hear and see most of the event 🙂

The reception was beautiful too! Lots of little details and food… 🙂 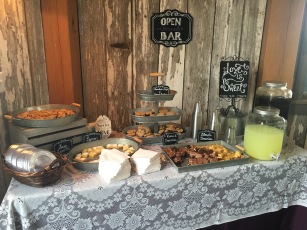 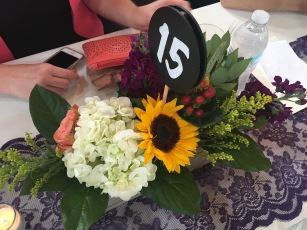 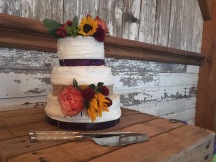 After a little snack session, dinner eats and saying hello to the wedding party, I hit the road! I REALLY wish I could have stuck around…but when I signed up for this race in February, there isn’t a lot I can do… 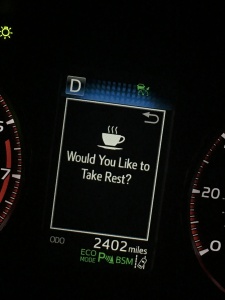 Yep! Another 1/2 marathon this weekend! I call it the I-70 Challenge!! (not a FAR cry from the actual I-35 challenge with the Kansas City and Des Moines marathons)

While this was not the most ideal planning on my part, I was going to make the best of it! My car understood that I was driving a lot this weekend too… No,…no resting!

I arrived in STL with my host family around 10:30pm. A little time for chatting, a second wind for everyone, and then forced to go to bed… But not before #flatlindsey was ready for another race!!

Tweet: Check out our Weekend Happenings with @dblred0728 and the other #linkups http://ctt.ec/70E71+ #fitfluential #sweatpink

Well…that sleep didn’t last long! Again…SUPER GLAD I set out my running gear the night before…yes, it put me in bed later than I wanted, but I was ready to run in no time!!

I drove to my parking garage, parked, get all packed up, and headed to the start area! As I was walking up, I saw a familiar face – Lynne! She was one of the ladies I met at the MO Cowbell ExMO a couple weeks before 🙂 She was volunteering at the race and we chatted for a bit about how her MO Cow experience turned out and what we both have been up to. That was fun!

Due to the wedding the night before and RNR’s super strict packet pick-up standards, I was in communication with them to be sure I could get my bib Sunday morning. Locked and loaded!

The worst part of the day was the uncertainty of the weather for the day. We were basically told that it was a high risk race and that anyone and everyone could drop to less distance at the 10K turnaround.

The clouds stayed out most of the morning – which helped, but I was sweating a lot pretty early in the race.

The course was nice, rolling hills, tree lined streets, and even a cowbell cheering section from the local Oiselle ladies!!

I didn’t go into this race with many expectations – other than to have fun and enjoy it! With tired legs, I still would have liked to finish between 2:20-2:30 and that was totally doable. I finished in 2:25 🙂 Very happy about the day!

I spent a little time at the post race party but soon left STL for home!

Once back in my familiar area, I was able to finally relax and not look at the time. Dinner was the first event once I got home…and the taco salad didn’t disappoint!

After an early bedtime, I decided to FaceTime the hubs…which was then interrupted by a little man trying to play a pillow fight…

How was your weekend? Have any exciting adventures?

Check out some awesome #linkups this week!

There is the great Weekly Wrap #linkup with Holly and Tricia! Also, check out a couple other weekend updates with Meghan, the Tumbleweed Contessa, and Ilka and Angela’s Sunday Fitness & Food link up!