Not every race goes as planned.

That is just the nature of the beast that is running in the great outdoors.

With recent snow and ice, we were prepared for the cold…but I was less prepared for warmer temps melting everything into a muddy mess.

Due to being a small-ish trail race, there wasn’t an extravagant expo experience. But who wants that for a grungy trails race?! I enjoy the simplicity of the Trail Nerds packet pick up process. There is a hotel near the trails where the bib/swag pick up is located – the Comfort Suites Conference Room.

You can get in, grab your bib and race swag, meet and greet some of the runners and volunteers, and get on your way!

For the 50K participants, while still urged to carpool, we were able to park in the parking lot at the race. For the 20M and 10M participants, there is a church parking lot across from the hotel where school buses shuttle the runners and spectators back and forth from the race.

The start is just a mass of people standing around behind the big flags. There is a countdown and a loud horn to let you know when to go.

Then there is a dash to get to the bridge…and then up the hill to the trail!

Once on the trail, you are in a conga line until the crowd starts to thin out a little…fasties will pass and everyone else climbs slow and steady!

The Wyco winter loop consist of mostly single-track and brindle trails with lots of rocks and roots. And don’t let your preconception of Kansas being flat fool you – this course boasts something like 1600″ of elevation change per loop (depending on what app you use). There is a lot of climbing throughout the course and your legs will be feeling it by the time you hit “the sisters”…trust me!

This year, we got the added “fun” of mud…lots and lots of mud.

Along the course, there are 4 aid stations – one of which you hit twice). All of the aid stations had various food and treats (granola-type bars/bites, nutella or PB wraps, m&ms, various gels/blocks/chews, waffles, etc.) as well as water, electrolyte drink, pickle juice, special celebratory drinks, and soda. The aid station crews really bring the excitement on course!

There are various port-a-potties or camp bathrooms along the course and at some of the aid stations. I have only used the playground bathroom at the start/finish area – and it did the job!

Since I was unable to get to the start/finish aid station by the cutoff, I received a “consolidation” medal – not distance specific, but it had a Trail Nerds logo on it, and a 20M sticker.

Another AMAZING swag item is the awesome pictures that Rick and Kristi Mayo take throughout the day. Mile 90 Photography is one of the best photographers I have seen when it comes to great race photos! There are various images throughout this post with the race logo in the bottom corner – that is all Mile90!

I hear that the post-race party is fun with food and drinks…but even though I didn’t make the cutoff for the final lap (which would have finished 3 hours later), they were already out of chili. I wasn’t all that happy about not finishing what I set out for, so I wasn’t too heart broken that I couldn’t find something to drink… But I did really want to try the chili!

With an awesome course, great support, and a fun atmosphere, this race (and any Trail Nerds races frankly) is one for the memory bank! While I didn’t have the day I set out for, I enjoyed the miles I could! I will be back next winter – and with any luck, I will get the 50K completed!

From the get-go, I was excited for the event – but I would be lying if I wasn’t excited about the weather… I am okay with a wet run, a cold run, a wet and cold run…but since this is a trail race, I was not excited to tear apart the trail.

The start of the race went off well and we all made out way around the camp bathroom, across the bridge, up the hill, and into the conga-line up the first section of the trail. I wasn’t quite sure how bad the trail was going to be…but it was a mud-pit from the start. 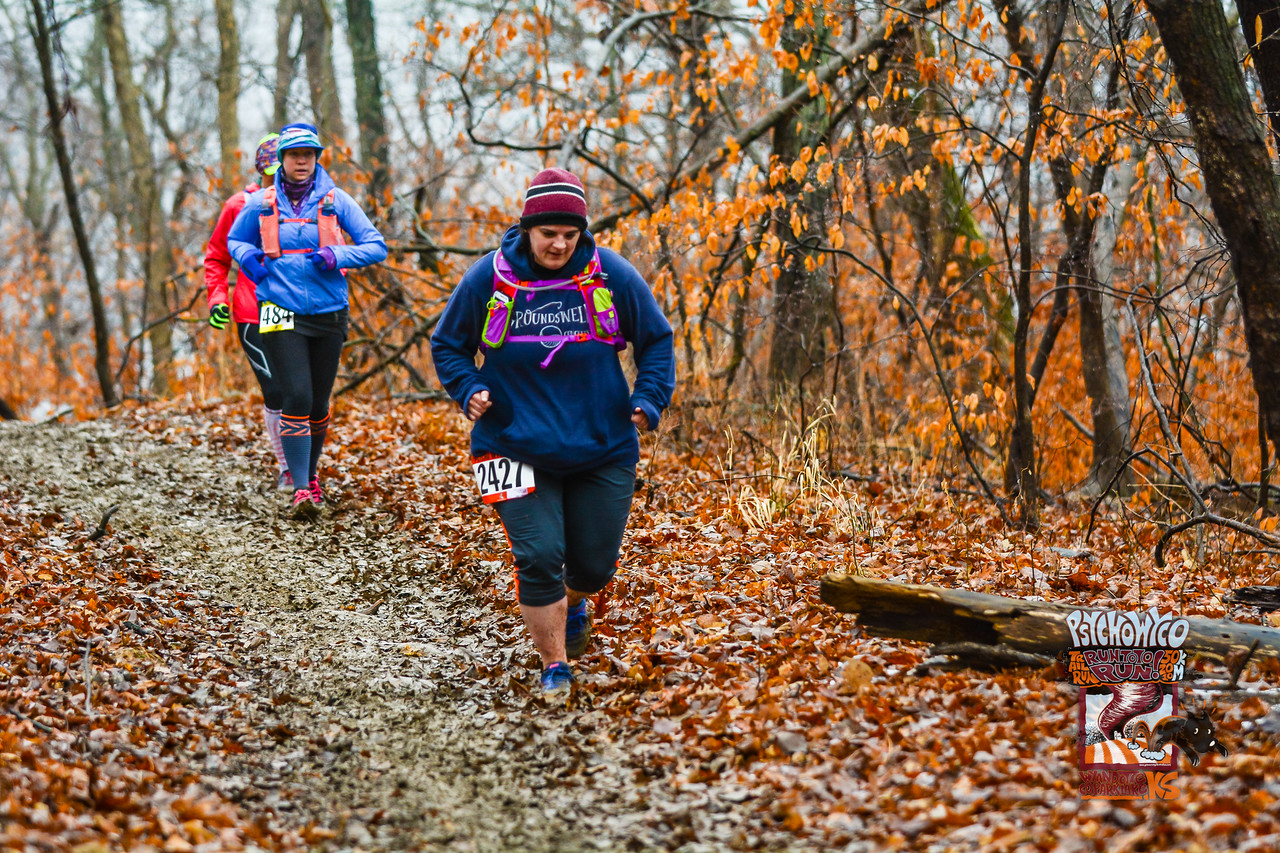 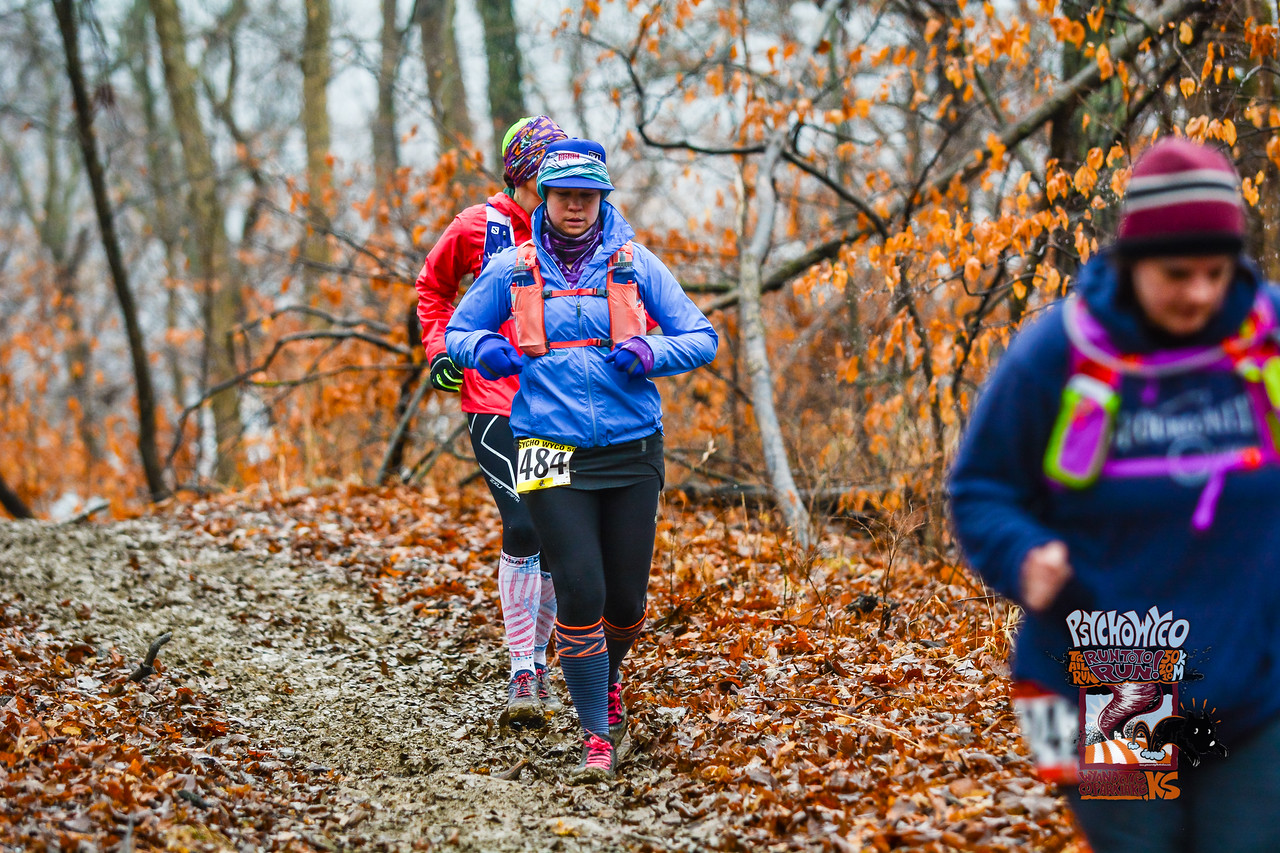 There were still a few pinch-points with runners, but the rest of the day was spent trying to NOT fall in the mud…and not fall in the creek crossings…

We made our way to the Triangle where we stopped at the first aid station stop, got a couple snacks and then skated and slid our way through. This area is a good mix of ascent and descent, twists and turns…which led to needing to use trees as life preservers – ha! I think I took out a little tree when trying to catch myself sliding down a hill… We hit up the same aid station on the way out of the Triangle and headed back on the “trail”.

I say “trail” because there wasn’t any trail to speak of…it was just a muddy, mud mess…and I really felt bad that these trails aren’t going to be in good shape for a while to come.

The only section of the trail that wasn’t a complete mud pit was the area down by the Dam and up to Speed Demon Ridge. Granted, the area by the Dam is an open, grassy, incline area on the dry side of the dam, open road up to the aid station, and then an uphill jaunt of a half mile of paved road…while I wasn’t running too much of it, I was just glad there wasn’t mud. 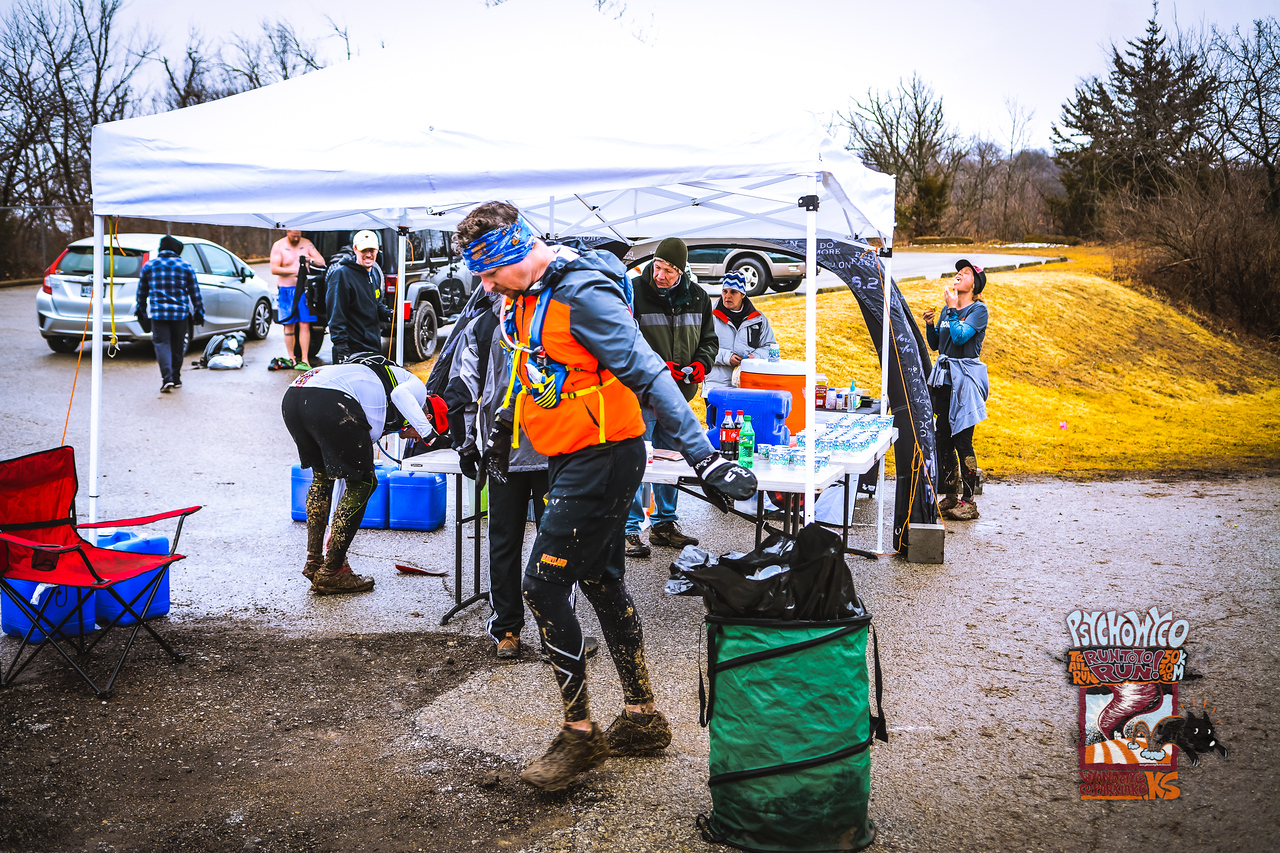 Once back on the trail, Speed Demon Ridge wasn’t too bad! There is an area called “broken leg turn” where I guess there are some issues with taking the hill a little too fast – but this section was a mix of slightly frozen ground with a little ice/snow from the previous weeks. This area was the most enjoyable because it was easy to traverse (the first time…). Again, we were able to catch one of the amazing Mile90 photographers while we made our way around. 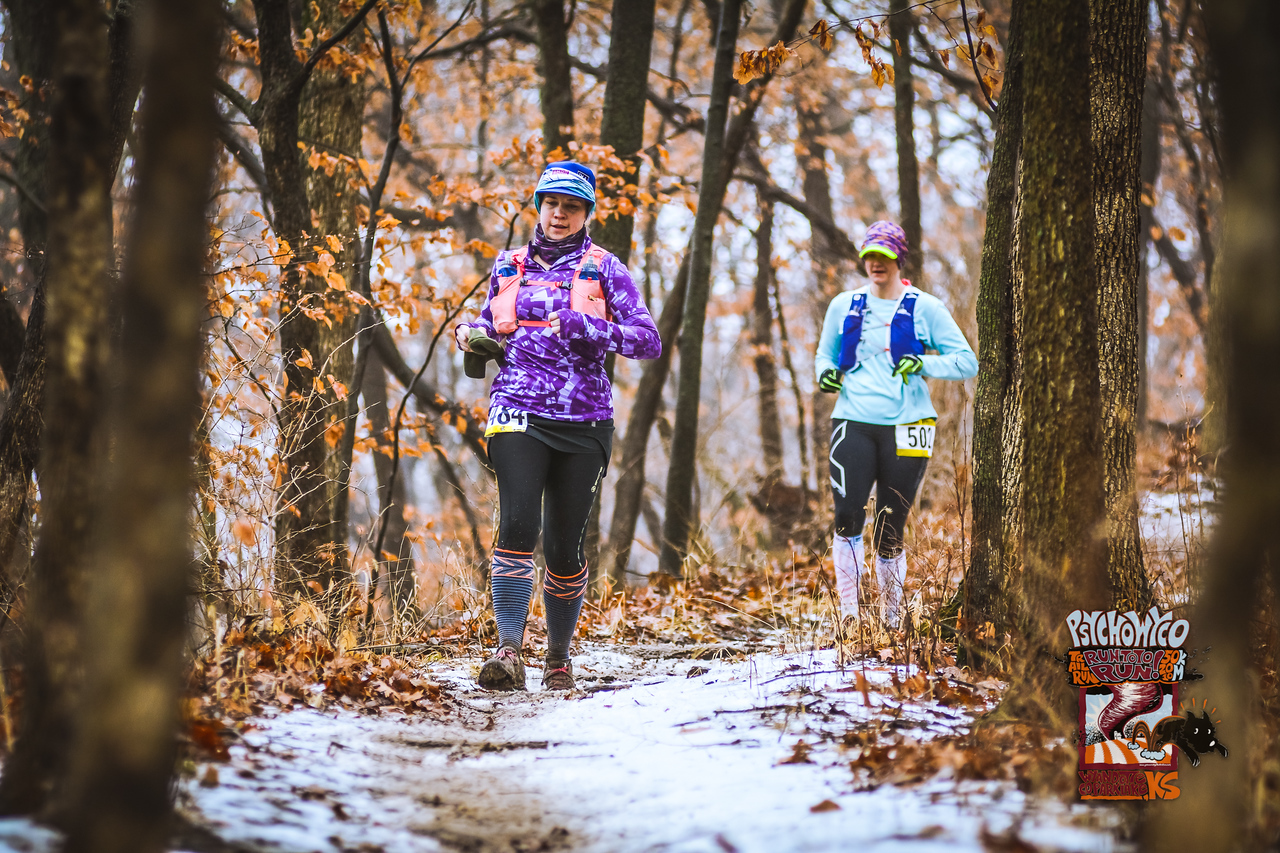 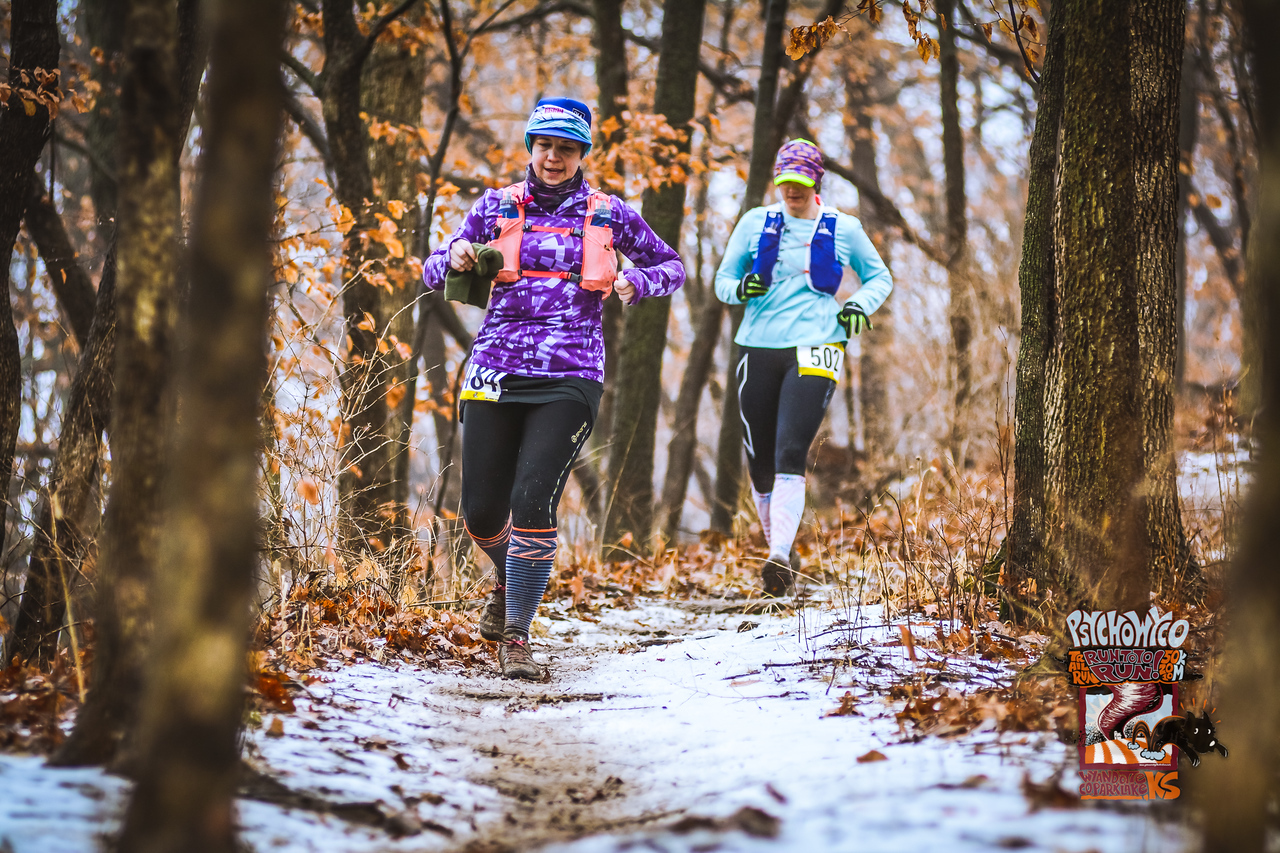 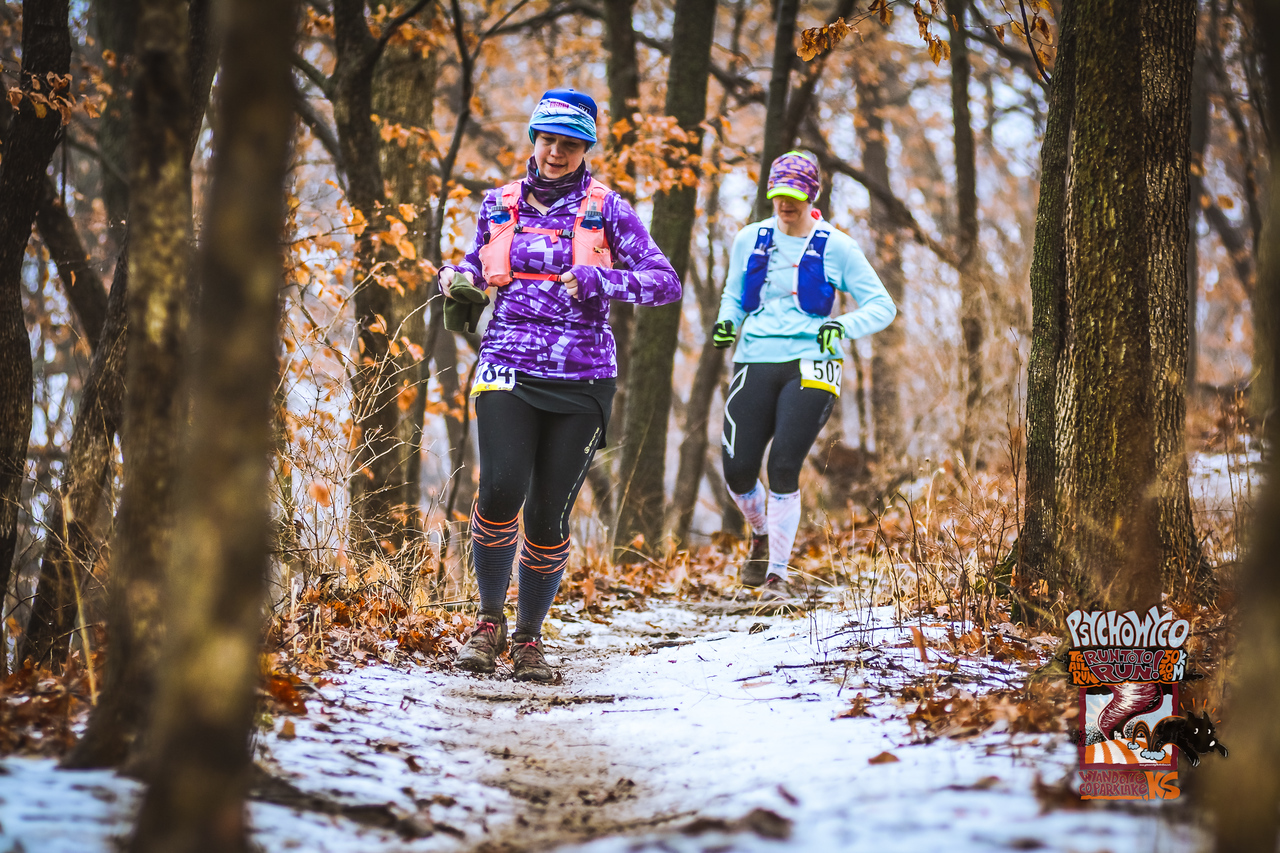 As we made our way around the first loop of the course, we couldn’t help but think about how the condition of the trail was going to be so much worse the second time around. Around this time, we also started getting passed by some of the fast 10M runners. This slowed down our progression a decent amount because we would step off the trail and then try to regroup our momentum without too much slipping and sliding.

The first loop of Festers Wander was another area that I enjoyed a bit more than the rest. The ground wasn’t TOO beat up the first time and the entertainment factor of the inclines that needed ropes was fun. I used one of the rope ascents, but the other just needed short steady steps to not slide down the hill.

Once we made our way down the Bridle Trail, we had several shoe cleaning stations (creek crossings) that helped for a second…until we got to the other muddy, mucky side 🙂 With one more aid station, we were on our way to the first of 3 finish lines!

The last section of the loop is called the three sisters, or three hills. They are a seemingly never ending climb to get to the finish. For the first loop, there were a couple of drummers drumming the runners up one of the hills. I do not remember which hill this was at…but it was a exciting twist to see them there! 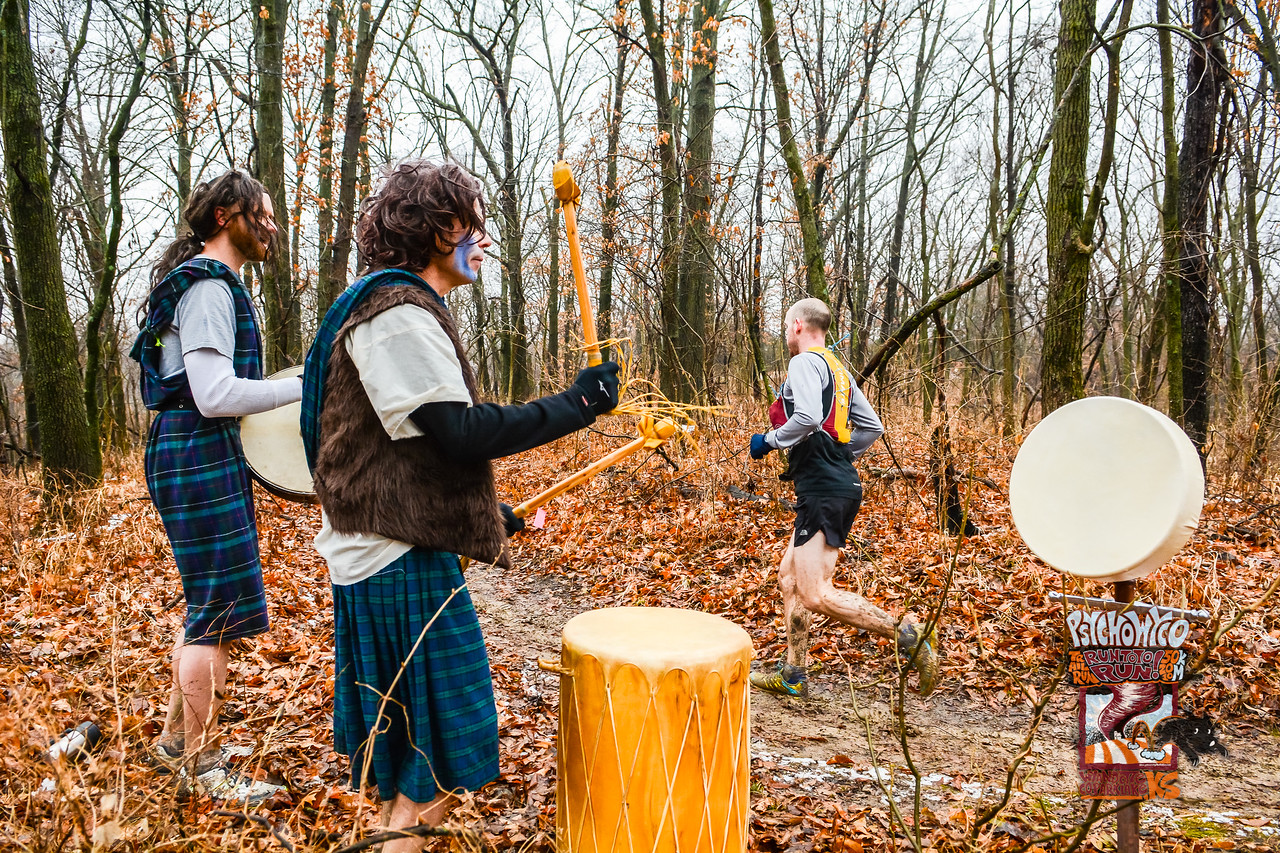 Once we stormed the finish, we grabbed a couple things and then headed back on to the trail!

This time, the trail was worse than it was the first time! I am not sure how that happened, but it did. I think that in the long run, we could have taken the trails a little harder and been a little less gentle with ourselves the first loop because we were not making the best time. Before too long, I knew that unless we made up some major time, we weren’t going to make the cut-off on the second loop… My running buddy and I came to this realization and tried to get out of our own heads…

Around this time, we were hitting the Triangle again. The aid station crew was excited for us to be there and lifted our spirits a bit…but when going thought the Triangle, our mind was relatively made up that if we tried to push too much, we were going to end up laid out on the trail…and neither of us wanted that. 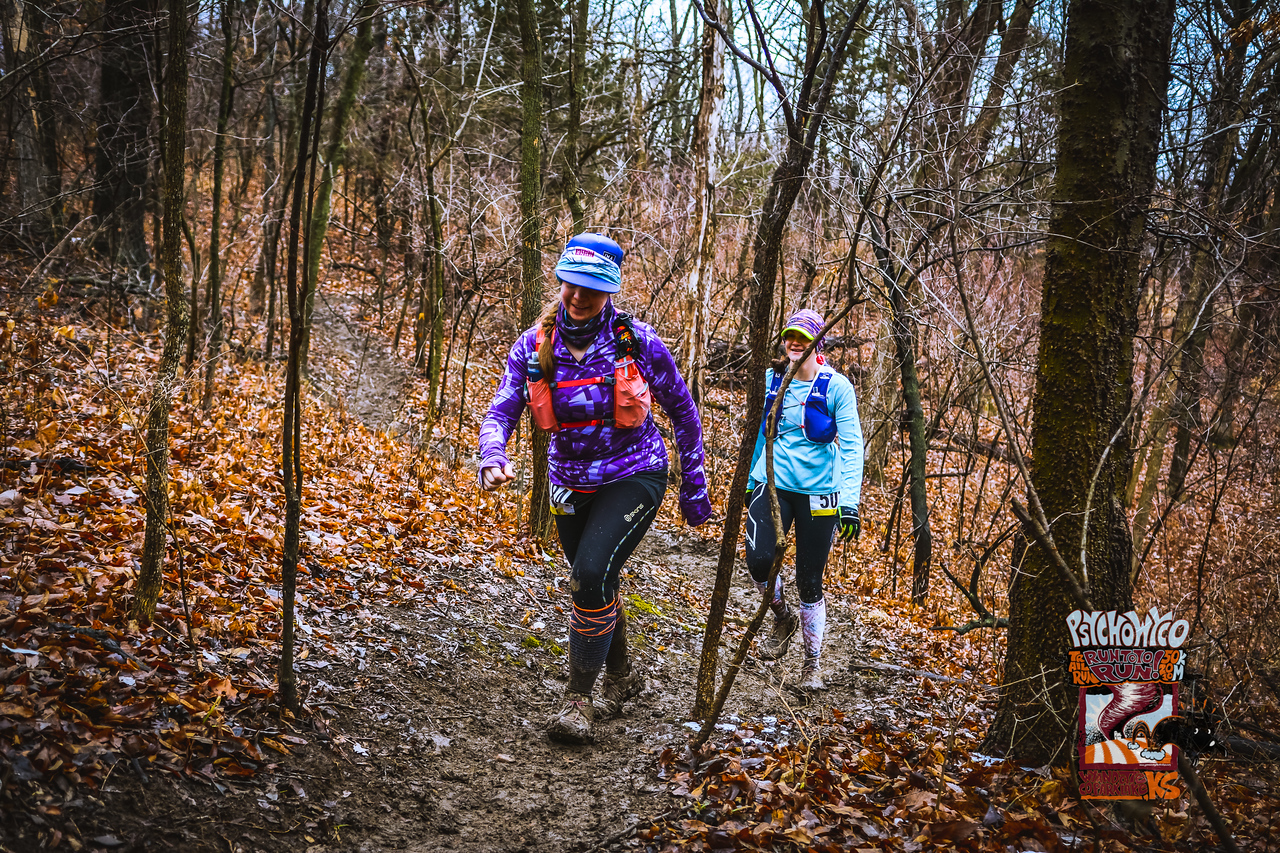 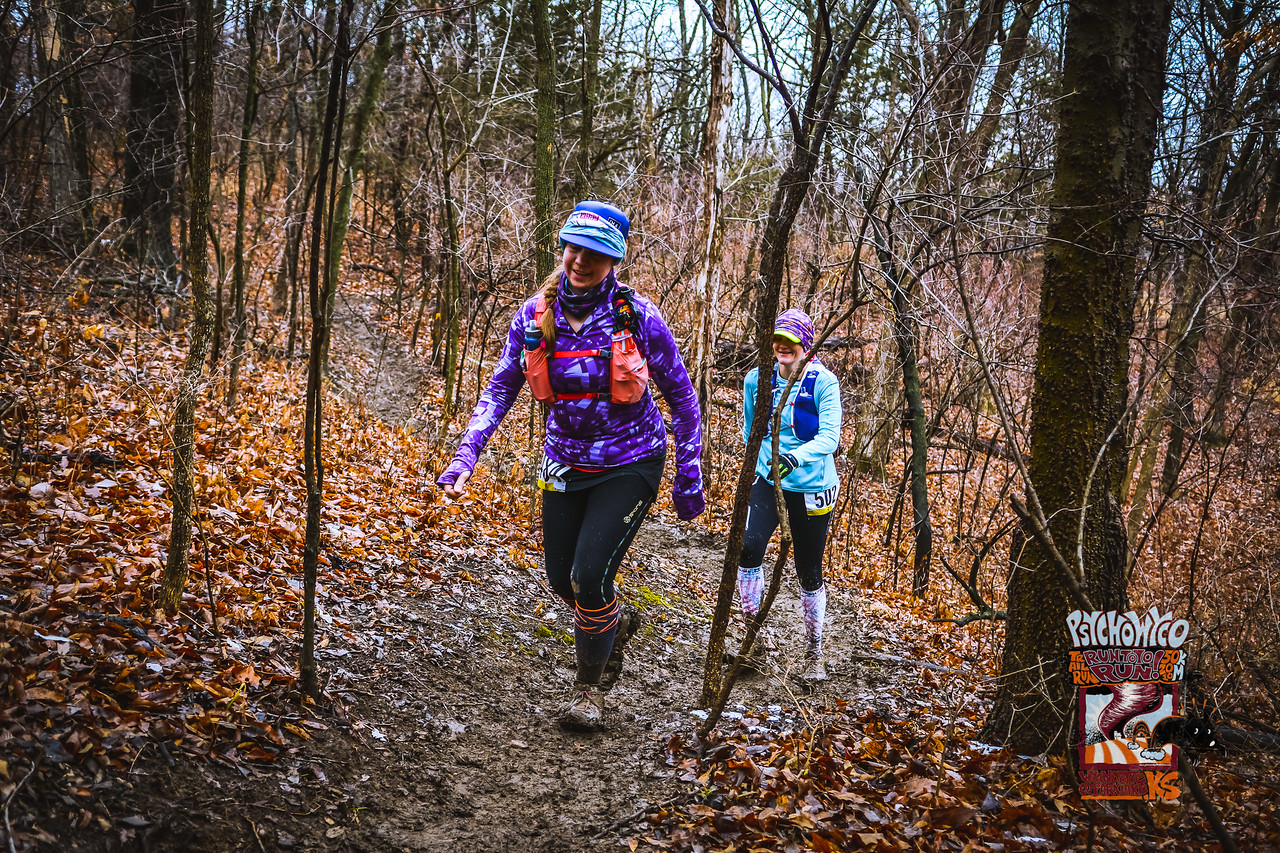 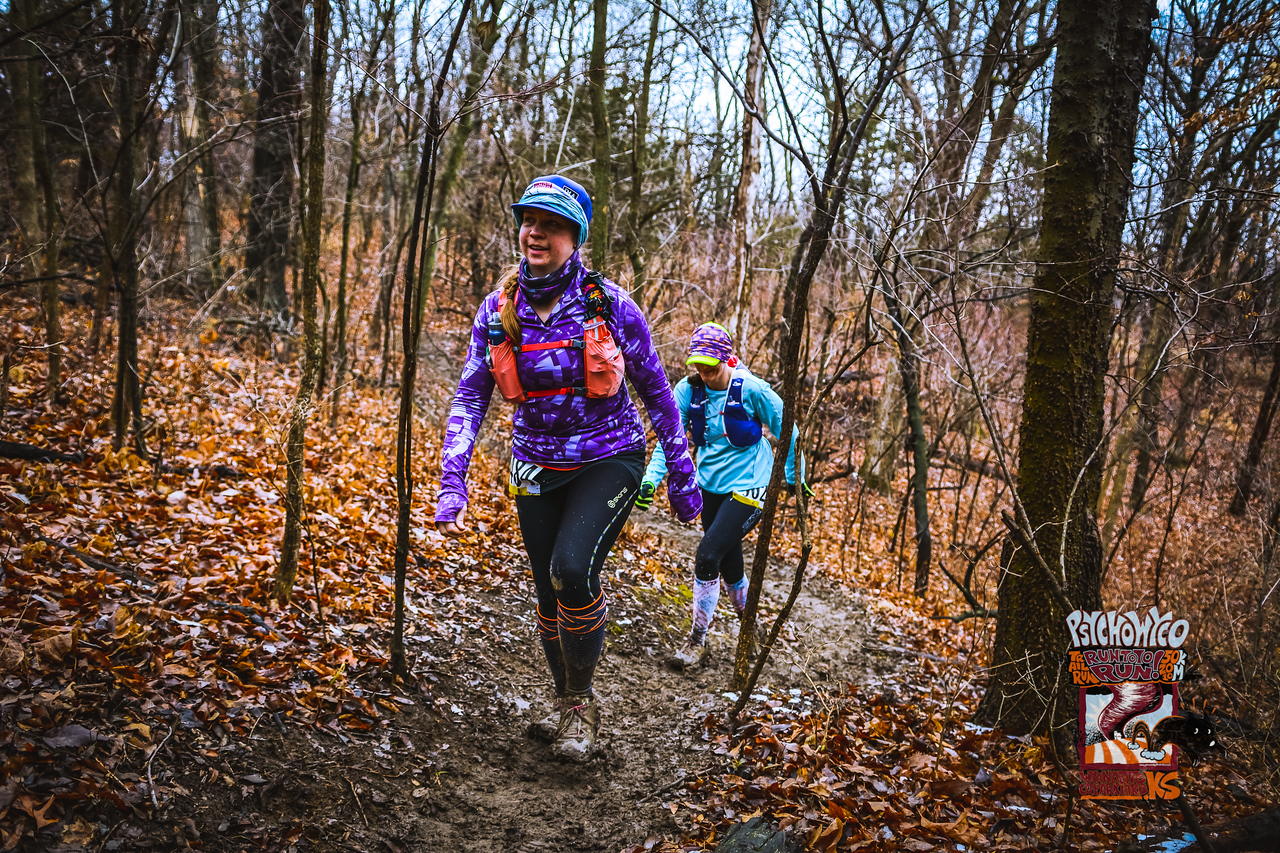 We stayed in the zone, but knew that unless there was a trail miracle, this would be our last loop.

The energy at the second Triangle aid station stop was sooooooo great and just what we needed to get out of our heads for a bit! My running buddy even took a shot (of who knows what) because we knew we may not have the chance to come back through again (see “Aid Stations” image above).

Other than the pity party we threw for ourselves off and on, we enjoyed what we could of the rest of the loop. The trails were way worse than the first time, but we had some fun!

Around 6.5 hours from the start, we trekked our way to the finish line! 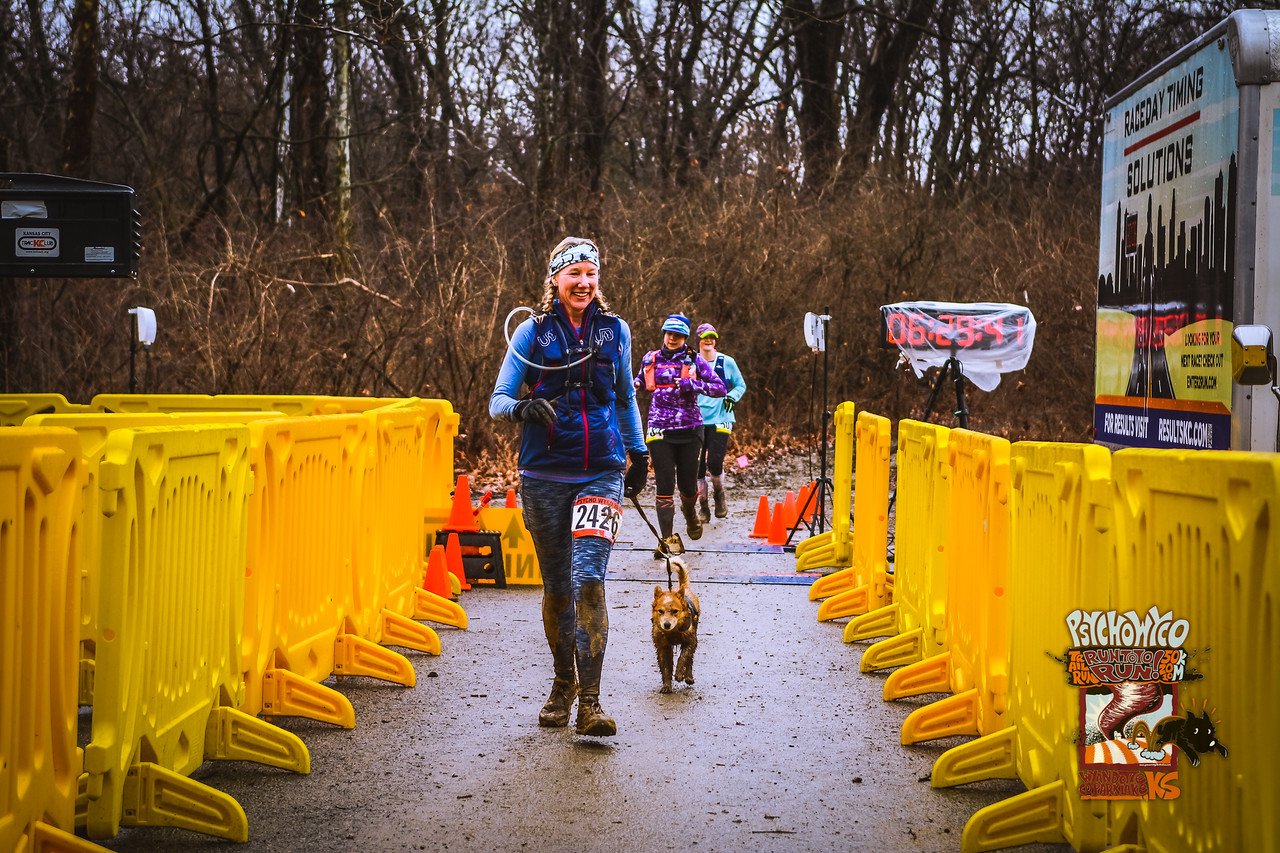 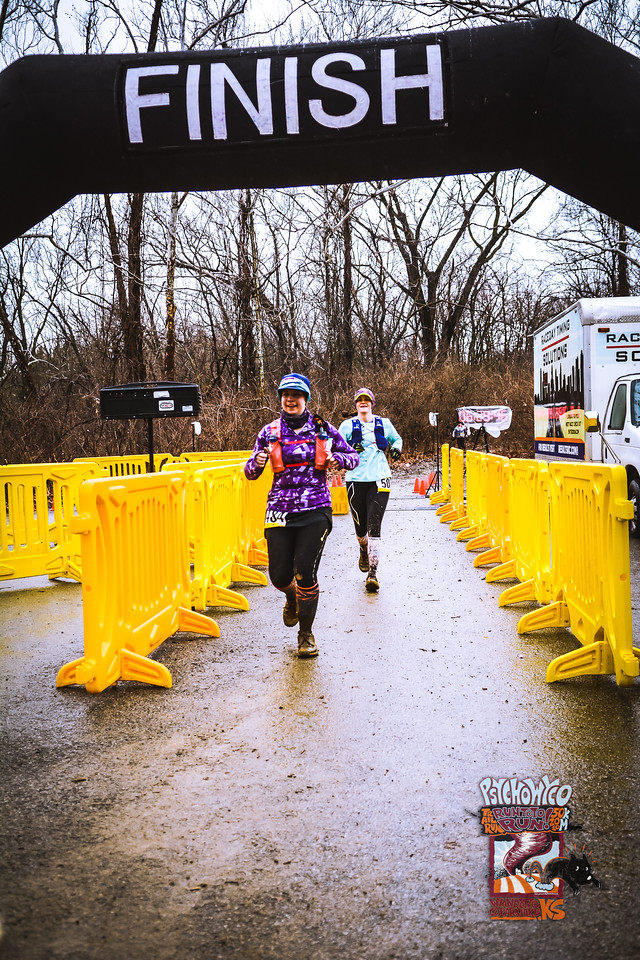 While we were “finished” with our day, we both had mixed emotions. I am glad that races like this allow runners to drop mid-race, but it is a hard pill to swallow when our training and anticipation was for the 50K finish and not 20 miles…

I love this race! I have run these trails a few times before and this was just a bad day. I would totally want to run this race again in the years to come – some days will be better, and some could be worse – but as long as I take what the trail give me on that day, it will be worth it!

Do you remember a while back when I posted about the great race tracking company Athlinks? Well, I was recently able to claim my results. Claiming a DNF isn’t my version of fun, but it was good to see that they labeled the finish as a “drop to 20 mile trail run”…took the sting off a little bit.

Have you had to drop distance in a race? Or even DNF? This is a first for me…dropping distance that is. But will probably not be the last! Bring on the miles!